History of the Żabiński Villa

Wartime Secrets of the Warsaw Zoo

We are in an unusual place – the House Under the Crazy Star. It was here, in this spacious, Modernist house, that several hundred people found a chance to live in humanit’’s most cruel time. In a time when death was the immediate penalty for giving a Jew a glass of water, two people, regardless of the consequences, decided to give shelter to those who were persecuted for belonging to a particular nationality. The walls of the Villa witnessed courage, humanity and attempts to fight against the inhuman system. “I took the risk and gave them shelter not because they were Jews, but because they were persecuted. If the Germans had been persecuted, I would have done the same. We are talking about people who were condemned, even though they had done nothing wrong. It was terrifying. My human obligation was to help them. Just plain decency.” Jan Żabiński, Yad Vashem 1965. 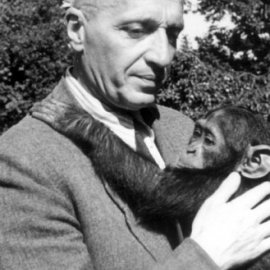 The villa was built as staff accommodation in 1931. It was inhabited by Jan Żabiński, who at the time served as director of the Warsaw Zoo, together with his family – wife Antonina, son Ryszard (in 1944 the family grew with the birth of a daughter, Tereska).

The building was the only one not destroyed during the war and only minor changes have been introduced to this day. It is surrounded by a French-style garden, where a tree planted by Dr Żabiński grows – a beautiful specimen of gingko.

The atmosphere and climate of the thirties of the last century has been restored in the rooms of the Villa. In the first room, it is worth to take a closer look at a few display cases containing a wealth of interesting insect specimens. This is the priceless collection of Szymon Tenenbaum, a world-famous Jewish entomologist, who was imprisoned in the Warsaw Ghetto with his family in 1940. He entrusted his entire collection of about 500,000 invertebrates to his friend Jan Żabiński for safekeeping. The collection was overlooked during the looting of the Warsaw Zoological Garden by SS units, and in 1944, three weeks before the Warsaw Uprising, it was moved to the Zoological Museum. In a bold action, Director Żabiński managed to get the professor’s wife out of the ghetto and hide her on the Aryan side. Unfortunately, Tenenbaum himself (supposedly did not want to leave the ghetto) died there in 1941.

Żabiński’s well-preserved books, most of them in German and most of them on zoological topics, fill the shelves that cover an entire wall. Director Żabiński’s original ashtray, donated by his daughter, sits on the table in the office. There are family photos on the walls and desk.

A grand piano stands in the living room. In situations of imminent danger, e.g. of German officers walking around the Garden, Antonina sat by the instrument and played various pieces of music, the selection of which passed on certain information to the illegal tenants. Most often it was a signal to everyone hiding at home and in the basement that the situation is dangerous and they should “disappear”.

Next, we go down to the cellars. Many escapees from the ghetto found shelter here. Years later, they testified at the Yad Vashem Institute about the heroism of the Żabiński family. Their names are written on the wall.

An underground tunnel led from the cellar to the outside of the building. At Antonina’s musical signal (most often it was a fragment of Offenbach’s La belle Hélène), the illegal tenants left the Villa to hide among the bushes between the aviaries.

In the cellars, we can see the commemorative room dedicated to Magdalena Gross who, while in hiding, filled up the long hours carving clay figures of the inhabitants of the zoo. There are numerous photographs of Gross’ works and a sculpture cast depicting Tuzinka, the elephant born in 1937, a favourite not only of the sculptor, but also of all the inhabitants of pre-war Warsaw.

Two films are broadcast in the cellars, one showing the lively pre-war Jewish quarter, the other – the accounts of the Żabiński family about their activities during the occupation.

Iza Chełkowska, a well-known stage designer, is the author of the Villa’s arrangement. 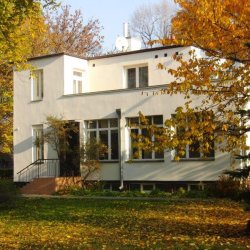 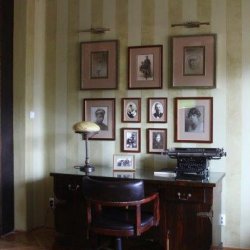 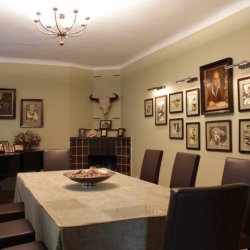 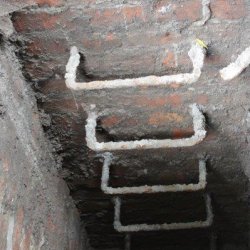 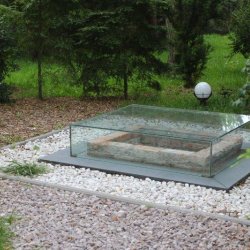 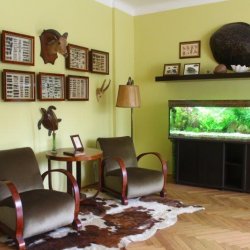