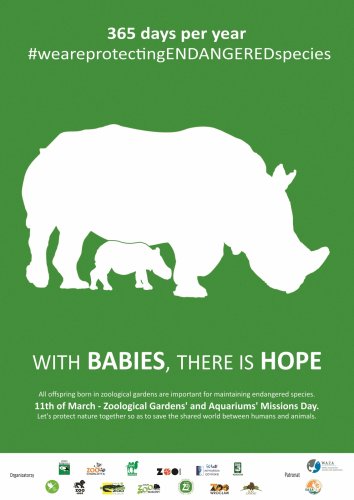 In order to highlight how important Zoological gardens are in saving endangered species, on the 11th of March we are celebrating “Zoological Gardens and Aquariums Mission Week” second time. Just like last year, thanks to the cooperation of our Polish Zoological gardens, a one-day celebration has changed into a weeklong one. This year’s motto “ANIMAL BABIES give us HOPE” explains how each animal born at the ZOO is important to preserve its respective species. This is why the heroes of this year’s Mission Week are the animals born at the Polish zoological gardens.

Do you love nature and would like to participate in saving endangered species? Join us for the events and celebrations! The only thing you need to do, is post a picture of your favourite ZOO animal on Facebook or Instagram, on the March, along with the hashtag #weareprotectingENDANGEREDspecies.

From the 8th to the 14th of March we will present some of the offspring born at the 13 Zoological gardens in Poland. You will get a chance to meet: a bison calf called Potilla, a crowned crane hatchling called Fanciszek, an infant patas monkey called Divo, an infant howler monkey called Zgredek, a juvenile axolotl called Abysk, a ring-tailed lemur pup called Karol, a roller chick called Siwowronka, a giant otter pup called Covid, a leopard cub called Nahla, infant pygmy marmosets called Ama and Zonk, a snow leopard cub called Layla, a penguin chick called Batman, and an infant ruffed lemur called Fart.

We will also tell you how incredibly important the missions and roles are of the current zoological gardens. This will include how zoological gardens aid saving and protecting endangered animals, and why each offspring born at a ZOO is so important.

We will not forget to mention numerous, interesting animal facts as well as puzzles and competitions.

Zoological gardens are real oases of greenery found amongst the city jungle or on the outskirts of great agglomerations. They provide an opportunity of animal contact and nature observation. Animals found at zoological gardens have not been arriving from the wild for many years now, rather they were being exchanged amongst the gardens themselves. These exchanges, just like many of the other aspects, such as the breeding and well-being of the animals are overseen by organisations like the EAZA, WAZA and EARAZA (to which zoological gardens belong to).

We would like to explain all these aspects to you during the ”Zoological Gardens and Aquariums Mission Week”. We are working on connecting people and animals all over the world, to protect the nature around us. Let’s work together for the benefit of the animals, in order to save the environment! 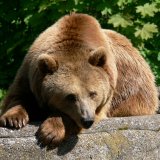 Sabina and Mała are Already in New Home

Sabina and Mała are already in their new home.

Dears, Tuesday, in the early morning, Sabinka and Mała were moved to the